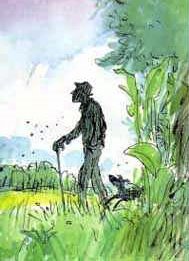 It starts out as the interview from Hell and ends up with a passionate conversation about the joys of chocolate over a Tupperware-box crammed full of Smarties, Crunchies, Mars Bars and Kit-Kats…

It is 1988, and I am travelling to Great Missenden in Buckinghamshire to interview Roald Dahl for the BBC. I go with numerous warnings hammering in my head: the creator of Willy Wonka and the BFG (Big Friendly Giant) is known to be difficult with interviewers. If he doesn’t like you or your line of questioning, you can easily find yourself being shown the door quicker than you can say “Oompah-Loompas!”

Of course, I know my stuff (I’ve been reading Dahl long before the writer achieved his status as the country’s premiere children’s author), but I’m anxious - TOO anxious - to impress… So, I have thoroughly boned up on dozens of articles about the man and made copious notes drawn from other people’s assessments of Dahl’s genius. I am absolutely determined to leave nothing to chance…

I arrive and am shown into the sitting room, where I set up my recording equipment. A few minutes later, Dahl enters wearing a cardigan and smoking a cigarette. He is considerably taller than I’d expected - the BFG no less - and I am intrigued by the way in which he sits down, collapsing his considerable height into an armchair rather as you might close up a large umbrella. The atmosphere is polite, if a little frosty; the eyes are gimlet-sharp rather than twinkly.

And so, the interview begins…

Referring to my numerous notes, I say in as confidant a tone as I can muster: “One commentator has noted that, essentially, your characters are all archetypes----”

I get no further.

“Are WHAT?” growls Dahl suspiciously.

“Oh! That’s not a word I’m accustomed to using myself,” snaps Dahl waspishly. “What exactly does it MEAN?”

The gimlet eyes bore deeper and my voice trails away.

“I see!” snorts Dahl. “You don’t seem to know what it means either! So, do you have anything YOU want to ask me, based on your own knowledge, as opposed to other people’s opinions? Or shall we forget this interview, rather than waste any more of each other’s time?”

The BFG has just turned into the Big Unfriendly Giant! 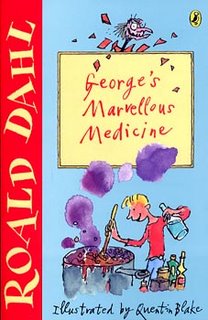 Desperate measures are clearly called for…. Abandoning my notebook, I blurt out the first thing that comes into my head: “At the end of George’s Marvellous Medicine, you say that George felt as if he had reached out and, with the very tips of his fingers, had touched the edge of a magic world… Is that what you want your young readers to do?”

There is a long pause. Dahl gives a wry half-smile. I await the inevitable explosion. Instead, comes a question: “Do you drink?”

Two large glasses are filled and the interview begins all over again - as if the uncomfortable prologue had simply never taken place - and continues for an hour-and-a-half, with Dahl talking freely and incisively about his books and how he writes them: "Whatever age group I'm writing for, I can instantly and precisely project myself back into what it felt like to be a child of three or seven or nine and then write for that child..."

He talks his philosophy of life: his love of libraries and good teachers and his passion for chocolate which stems from a childhood ambition to work as an inventor in a sweet factory just like the one in Chitty Chitty Bang Bang for which he wrote the screenplay: "Oh, God, but that was an awful movie!"

His ultimate appraisal of the books he has written is almost self-deprecating: "I think one or two of them may outlive me and even come to be thought of in a 'classicy' sort of way..." 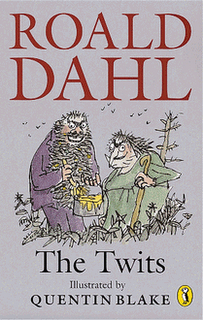 He also reveals some of his pet-hatreds which include - in addition to the unthinking use of such words as ‘archetypes’ - virtually everyone involved in politics, bad teachers, bad parents and all instances of facial hair, such as the beard sported the terrible Mr Twit and, indeed, by the hapless interviewer!

“I have to tell listeners,” Dahl confides into my microphone, “the gent who is talking with me now has a face COVERED in fungus! It’s really quite DISGUSTING! I can even see part of his breakfast in there! I dare say if it wasn’t smothered in all that ghastly hair, it would be quite a NICE face, but there’s absolutely no way of knowing!”

“Do you have a razor?” I daringly quip.

“Shave in your own time, not mine!” parries Dahl with a chuckle.

“I wasn’t thinking of shaving,” I instantly reply, “I was thinking of CUTTING MY THROAT!” 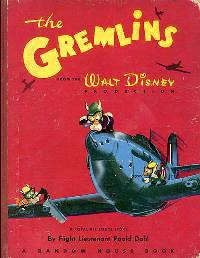 At the end of the interview, Dahl signs my copy of his very first book, The Gremlins that was originally to have been made into a Disney WWII animated film.

He inscribes it “With love, Roald Dahl”, asks my date of birth and then adds it to the inscription - but cunningly backdated six years to 1943, the year of publication.

“There!” he bellows triumphantly, “If they come across this after you’re dead, that should screw things up nicely for whoever’s trying to sort your affairs!” 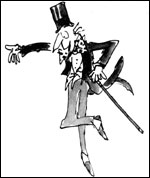 Not wishing to push my luck, I make my thank-yous, pack up my tape-recorder and prepare to leave -- only to be invited to stay for lunch!

A deliciously long and jolly meal eventually concludes with a dessert in the form an outsize Tupperware-box stuffed with sufficient sweets and chocolate bars to satisfy even the great Mr Wonka!

An unforgettable encounter - and a most valuable warning against the irresponsible use of such words as ‘archetype’!


A short extract from my interview was later included in The Roald Dahl Treasury, illustrated by Quentin Blake.